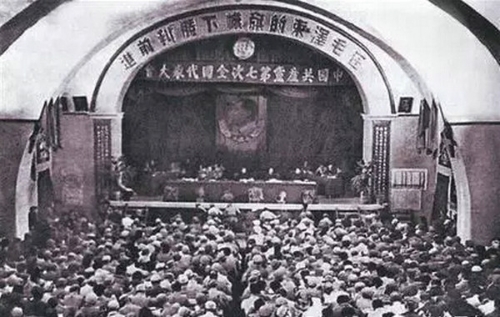 The Seventh National Congress of the Chinese Communist Party was convened in Yan'an. Attending the congress were 547 full deputies and 208 alternate deputies, representing 1.21 million Party members. Mao Zedong presided over the congress. In his opening address he pointed out that China was confronted with a struggle between two prospects and two destinies and the Party's task was to strive with all its might for a bright future, a destiny of light, and against a dark future, a destiny of darkness. At the congress, he made the political report “On Coalition Government," the report on the situation and the ideological and political problems, the conclusion on the discussion of the political report and a speech on the question of election; Zhu De delivered the military report “On the Battlefield in the Liberated Areas” and the conclusion on the discussion of military problems; Liu Shaoqi made the report “On the Revision of the Party Constitution” and the conclusion on the discussion of the organizational question; and Zhou Enlai made an important speech “On the United Front.” Ren Bishi, Chen Yun, Peng Dehuai, Zhang Wentian, Chen Yi,Ye Jianying, Yang Shangkun, Peng Zhen and Nie Rongzhen also spoke at the congress. The congress adopted the political resolution, the military resolution and the new Party Constitution. It systematically summed up the Party's experience in leading the Chinese revolution in the past 24 years, profoundly expounded the basic theory of new-democracy, pointing out that the Party's line was to “boldly mobilize the masses and expand the people's forces so that, under the leadership of our Party, they will defeat the Japanese aggressors, liberate the whole people and build a new-democratic China.” The congress summed up the experience in armed struggle, united front and Party building and profoundly expounded these “three magic weapons" with which to carry out the new-democratic revolution, and the Party's three important styles of work-integrating theory with practice, forging close ties with the masses and conducting self-criticism. In the new Party Constitution adopted at the congress Mao Zedong Thought that integrated Marxist-Leninist theory with the practice of the Chinese revolution was made the guideline for all the Party's work. In accordance with the principle of developing democracy and strengthening unity and proceeding from the desire for unity, the participants carried out criticism and self-criticism against the mistakes made in the past and, adopting the  conception that “one divides into two,” they patiently helped and explained things to errant comrades for the purpose of uniting and working together with them. The congress elected a new Central Committee. The Seventh Congress had gone down in history as a congress f unity and victory. 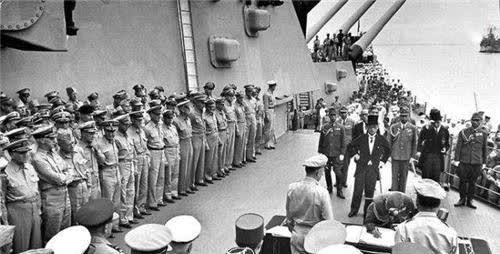 Japanese Emperor and Government as well as the representative of the Japanese general headquarters signed the instrument of surrender. This crowned China's War of Resistance Against Japan and the Second World War with final victory. The War of Resistance Against Japan was a national liberation war in which the Chinese people won complete victory for the first time in a century-long struggle against foreign invaders and it was an important component of the anti-fascist world war.

Victory in the war of resistance was won through arduous and complicated struggle of the people of all nationalities throughout the country and at immense cost. According to statistics, over 21 million Chinese armymen and people were killed or wounded and the loss of property amounted to 60 billion U.S. dollars at least. During the eight years of the war of resistance, the Eighth Route Army, the New Fourth Army and other people's anti-Japanese armed forces led by the CPC fought 125,000 battles, wiping out 1,714,000 Japanese and puppet troops, capturing 694,000 arms of different kinds and 1,800 pieces of artillery. More than 600,000 commanders and fighters of the Communist-led armies lost their lives or got wounded and over 6 million people in the liberated areas were killed or wounded. Through the eight years of fighting, the people's revolutionary forces led by the CPC grew much stronger than before, the liberated areas covered an area of nearly one million square kilometres with a population of 100 million, and the main forces of the people's armies exceeded 1.2 million and the militia, 2.6 million. This laid a solid foundation for nationwide victory in the new-democratic revolution.