*In his speech at the G20 summit, Chinese President Xi Jinping called on G20 members to stand with each other in the face of risks and challenges, join hands together, and elevate win-win cooperation to a new height.

*China's goal is to work with all parties to champion the spirit of the UN Charter, act on the principle of indivisible security, uphold the vision of common, comprehensive, cooperative and sustainable security, advocate the resolution of conflicts through negotiation and settlement of disputes through consultation, and support all efforts conducive to the peaceful settlement of crises, Xi said.

*Development is real only when all countries develop together, and prosperity and stability cannot be possible in a world where the rich become richer while the poor are made poorer, Xi noted.

BEIJING, Nov. 20 (Xinhua) -- Thailand's traditional woven bamboo basket, chalom, was transformed into the logo of this year's Asia-Pacific Economic Cooperation (APEC) meeting, delivering a wish to weave together the strengths of APEC members to overcome current geopolitical and economic headwinds.

In his first foreign trip after the conclusion of the 20th National Congress of the Communist Party of China, Chinese President Xi Jinping attended both gatherings and participated in more than 30 events in six days, which sent out a resounding message on promoting global development and leading global governance, demonstrating China's role as a rational, confident and responsible major country.

In a declaration adopted at the end of the G20 Bali Summit, the G20 leaders said that collectively they carry responsibilities, and their cooperation is necessary for global economic recovery, tackling global challenges and laying the foundation for strong, sustainable, balanced, and inclusive growth.

Three days later, leaders of the APEC economies also issued a declaration, vowing that APEC's cooperation will contribute to practical solutions for common challenges and complement global efforts including the UN 2030 Agenda for Sustainable Development.

The solidarity and determination demonstrated in the two documents resonated with China's appeal for international cooperation in tackling global challenges and its commitment to enhancing world stability and prosperity. 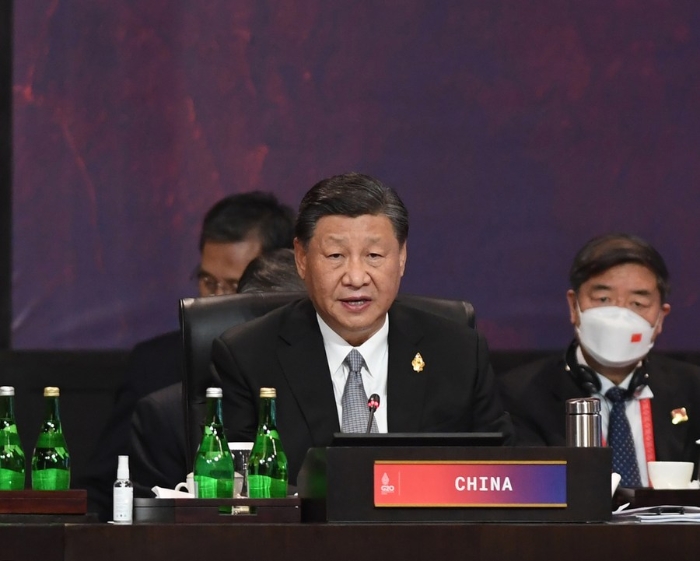 In his speech at the G20 summit, Xi called on G20 members to stand with each other in the face of risks and challenges, join hands together, and elevate win-win cooperation to a new height.

The G20 should stay committed to its founding purpose of unity and cooperation, carry forward the spirit of solidarity, and uphold the principle of consensus, Xi said, adding that division and confrontation serve no one's interest, and only solidarity and common development is the right choice to make.

Reviewing the past decades of robust economic cooperation and remarkable growth in the region, Xi said in a written speech at APEC CEO Summit that "the Asia-Pacific miracle has been created by all of us working hand in hand and overcoming difficulties and obstacles."

The region owes decades of its rapid growth to a peaceful and stable environment, Xi said at the 29th APEC Economic Leaders' Meeting. "History has proven time and again that only openness, inclusiveness and win-win cooperation is the right way forward for humanity," he added.

Herman Tiu Laurel, founder of the Manila-based think tank Philippine BRICS Strategic Studies, said he identifies with Xi's call for the Asia-Pacific to follow "a path of peaceful development," "a path of openness and inclusiveness" and "a path of solidarity," which is exactly what the Chinese government has been practicing.

These important experiences are a solid foundation for various parties to promote dialogue and cooperation, and uphold solidarity and confront challenges, he said.

The world has been beset with mounting global security threats, including worsening food and security crises, growing attempts to form bloc politics and stoke confrontation, rising protectionism and isolationism, a resurgence of the outdated Cold War mentality as well as arbitrary sanctions that have seriously disrupted international cooperation to shore up recovery.

In this context, Xi pointed out at the G20 summit that global development would be impossible without a peaceful and stable international environment.

He said that China's goal is to work with all parties to champion the spirit of the UN Charter, act on the principle of indivisible security, uphold the vision of common, comprehensive, cooperative and sustainable security, advocate the resolution of conflicts through negotiation and settlement of disputes through consultation, and support all efforts conducive to the peaceful settlement of crises.

The Chinese president's remarks were echoed by overseas experts, who said the consensus on cooperation reached at the G20 summit has greatly boosted global confidence in overcoming the current crises and striding toward a shared brighter future.

"As China rightly points out, a coordinated global approach to those problems of the world is a must," said Selcuk Colakoglu, director of the Turkish Center of Asia Pacific Studies.

Xi identified food and energy security as the most pressing challenge in global development, saying that the root cause of the ongoing crises is not production or demand, but interrupted supply chains and international cooperation.

At the APEC CEO Summit, Xi said that any attempt to disrupt or even dismantle the industrial and supply chains formed in the Asia-Pacific over many years will only lead Asia-Pacific economic cooperation to a dead end.

Openness brings progress while closing the door can only leave one behind, Xi stressed.

Xi's remarks reaffirmed China's commitment to and sincerity about economic cooperation and partnership with other economies, which are "quite timely," said Anna Malindog-Uy, vice president of the Manila-based think tank Asian Century Philippines Strategic Studies Institute.

Global development has been reeling from the pandemic, mounting geopolitical rifts and growing protectionism and unilateralism.

Addressing the first session of the G20 Bali summit, Xi put forward a three-point proposal, underscoring the need to make global development more inclusive, beneficial to all and more resilient.

"No one should engage in beggar-thy-neighbor practices, building 'a small yard with high fences,' or creating closed and exclusive clubs," Xi said.

Development is real only when all countries develop together, and prosperity and stability cannot be possible in a world where the rich become richer while the poor are made poorer, Xi noted.

"China, as a member of the Asia-Pacific, has benefited much from the region. In return, it has shared its development gains with others in the region," said Xi at the APEC CEO Summit.

The Jakarta-Bandung High-Speed Railway, a landmark project under the Belt and Road Initiative, serves as a vivid example of China's fulfillment of its common development commitment. With Chinese technologies, the bullet train service, once put into operation, will speed up and improve the mobility of people and goods, enhance Indonesia's overall competitiveness, and nourish new economic growth drives in Jakarta and Bandung.

"Cooperation, innovation and mutual benefits are the essence of the successful practice and spirit of the construction of the Jakarta-Bandung High-Speed Railway," said Dwiyana Slamet Riyadi, president director of the joint venture consortium that runs the line.

For decades, China has been lending a helping hand to developing countries, especially those in Asia, Africa and Latin America through investment, infrastructure, skills training and education.

The declaration adopted by the end of the two-day 29th APEC Economic Leaders' Meeting affirmed APEC leaders' long-standing commitment to promoting strong, balanced, secure, sustainable and inclusive growth, as well as their commitment to realizing the APEC Putrajaya Vision of an open, dynamic, resilient and peaceful Asia-Pacific community by 2040.

Fernando Reyes Matta, former Chilean ambassador to China and director of the Center for Latin American Studies on China at Chile's Andres Bello University, said that in the 21st century thinking, "it is necessary to consider integrating diverse development projects into peaceful coexistence."

The Pacific region should, as its name suggests, be a region of peace, where cooperation channels remain open while competition does not compromise relations between peoples and nations, he said.