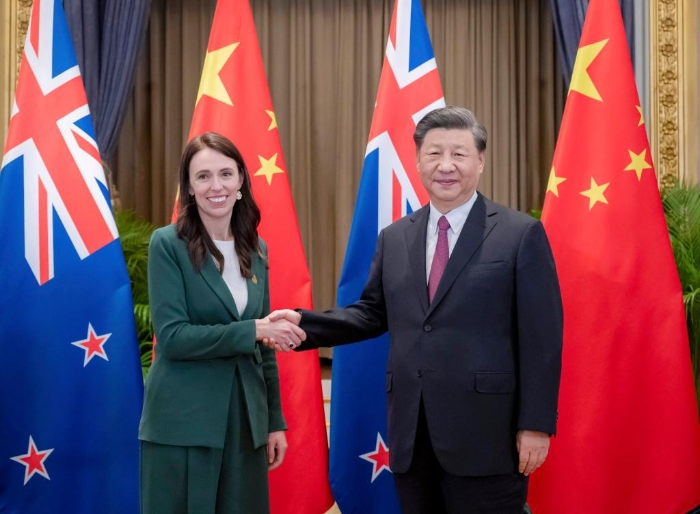 Peace is China's most unremitting pursuit. China has never sought hegemony in history; it is not doing that now, and will never do that in the future, he stressed.

On China-New Zealand relations, Xi said he highly appreciated that Prime Minister Ardern has indicated on many occasions that New Zealand adopts an independent foreign policy; its relationship with China is one of the country's most important and there are shared interests on which New Zealand and China can and should cooperate.

Noting that this year marks the 50th anniversary of diplomatic ties between China and New Zealand, Xi said this relationship has maintained sound and steady growth over the past five decades. Bilateral cooperation in various fields has delivered benefits to the two peoples and contributed to peace, stability and prosperity in the region.

He said China regards New Zealand as an important partner and friend, calling on both sides to draw inspiration from history and continue to strive to be the first so as to advance the comprehensive strategic partnership between the two countries.

Xi noted that with different social systems, stages of development, histories and cultures, it is natural for China and New Zealand to have differences on some issues, but these differences should not be allowed to define or affect the bilateral relations.

As comprehensive strategic partners, China and New Zealand should enhance communication and mutual trust, and accommodate each other's core interests and major concerns to ensure that this relationship is sustainable and grows along the right path, he stressed.

He called on both sides to deepen their exchanges and cooperation in areas such as economy and trade, science and technology and education, and implement well the upgraded bilateral free trade agreement and the Regional Comprehensive Economic Partnership Agreement.

He said it is important to preserve and carry forward Rewi Alley's spirit, support stronger dialogue and exchanges at subnational levels, between the general public and among the younger generation, so as to strengthen their people-to-people friendship.

As both China and New Zealand are advocates and beneficiaries of multilateralism and free trade, efforts should be made to keep to the right direction of economic globalization, promote trade and investment liberalization and facilitation, and jointly tackle climate change and other global challenges, Xi said.

On her part, Ardern recalled Xi's visit to New Zealand in 2014, a vivid memory of many in the country, and her meeting with Xi during her visit to China in 2019.

She noted that New Zealand has a long history of friendship and exchanges with China. Despite the impact of COVID-19, bilateral relations have maintained a strong momentum of growth.

The two sides need to take the 50th anniversary of diplomatic ties as an opportunity to take stock of the past, enhance high-level exchanges and deepen cooperation in such fields as economy and trade, education and climate response, she said.

The prime minister highly commended the important points made by Xi at the APEC Economic Leaders' Meeting, and thanked him for the insights he shared.

She said New Zealand views China as a key part in a future world of progress and prosperity, upholds the one-China policy, and is committed to stepping up communication and mutual understanding with China.

She pledged that New Zealand is ready to have in-depth exchanges with China on South Pacific affairs, and contribute to the prosperity and stability in the Asia-Pacific.