Without the CPC, Ayagemangan Village Would Not Be Flourishing Today

As you enter Ayagemangan, a village in Shufu County of Kashgar Prefecture, Xinjiang Uygur Autonomous Region, a thousand-meter cultural corridor unfolds before you along wide and pristine asphalt roads. Houses featuring modern elements and ethnic features are interspersed with a movie theater, flower shops, breakfast houses, chess and card clubs, and a cooperative. The atmosphere is typical of China's beautiful countryside in the new era.

On April 28, 2014, President Xi Jinping visited the people of Ayagemangan. "I have come to see you and to check if our Party's policies for the public benefit have been embraced by the people and are playing their due role. Our Party's goal is to work for whatever will meet the expectations of the people. I hope that with the support of the Party's policies, you can realize even happier lives."

President Xi's earnest wish contained strong motivation that inspired the people of Ayagemangan Village to roll up their sleeves and work even harder. In just eight years, the village has transformed itself from an impoverished settlement to a place with a strong reputation for social stability, economic development, ethnic unity, and social etiquette and civility. Starting from scratch, the village has developed a collective economy worth more than one million yuan, with per capita income in the village increasing by more than 10,000 yuan. "Now that we have work, earn good wages, and are enjoying good prospects, life is improving all the time,” declared one villager.

Building a strong Party branch to serve as the driving force

"Without the CPC, Ayagemangan Village would not be flourishing today," said Yusuf Abla. "Though I am getting on in years, joining the Party has brought me the greatest joy." When the 86-year-old Yusuf became a CPC member in December 2021, a video of him with tears of joy moved many people when it was released online.

During his visit, President Xi stressed that rural Party organizations must become a strong force for uniting the people and leading them in building a new socialist countryside. If this condition is satisfied, rural areas will have strong momentum to pursue development.

Following the direction pointed out by President Xi, the work team assigned to Ayagemangan from the school of CPC Xinjiang Committee and the village Party branch and village committee gradually took a wide range of steps. These included convening a village residents' assembly to select capable people for driving development; establishing a one-to-one mechanism for work-team members to assist village officials, starting with guidance in basic subjects like standard spoken and written Chinese and computer operations; and establishing a residents' code of conduct to set basic standards for promoting appropriate and healthy lifestyles. 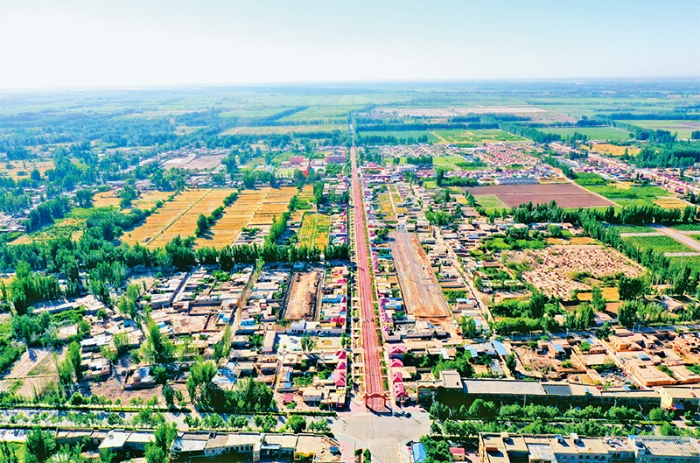 A solid team of village officials has gradually taken shape, with marked improvements in cohesion and competence.

The development of industry is vital for poverty alleviation. But Ayagemangan Village, which is home to more than 5,000 people, had never previously had any well-regarded industries.

How could the village best harness industry in order to eliminate poverty at the root? Through an in-depth study, the work team assigned to the village, along with the village Party branch and village committee, decided to work according to local conditions and pursue a collaborative model involving the Party branch, village cooperative, and households, with the focus on handmade products and flower cultivation.

Broom making is a craft that has been passed down from generation to generation for more than a century in the local area. Under the guidance of local officials, villagers established a professional handicraft cooperative to focus on developing this craft as an industry. Yusuf Abla, the third generation of his family to inherit the craft, explained, "In the past, we made brooms to sweep the floors and beds. You couldn't earn much money from selling them. The work team assigned to the village explained that we should market the brooms as tourist souvenirs and handicrafts. They even arranged for me to go to Inner Mongolia to learn how to do this. Today this vision has now become a reality." In 2021, the village sold 1.1 million brooms, with an output value of over 10 million yuan. The craft of broom making is now helping to drive the villagers along the road toward prosperity.

As the village has developed four major bases for vegetable and non-staple food cultivation, flower planting, handicraft production and sales, and tourism featuring revolutionary heritage, it has created an integrated development framework that incorporates tourism, along with accommodation, sightseeing, and leisure, thus providing employment to a large number of residents.

The current era in Ayagemangan Village is best illustrated by the fact that everyone who is able to work is working, every family is earning decent money, and every household is striving toward prosperity.

During his visit to Ayagemangan, President Xi Jinping instructed local village officials and work team members to "communicate more and consult more, solve problems through concerted efforts, and see that every matter in the village is well-handled." Village Party branch secretary Mamattursun Abdurahman explained that based on President Xi's instructions, for the past eight years, the work team assigned to the village and the village Party branch and village committee have worked hard to transform the appearance of the village. They have progressed gradually, starting with tasks related to the vital interests of residents, such as housing renovations, road building, street lighting, living environment improvements, and the installation of natural gas in households.

Following the crisp sounds of students reading, we arrived at the primary school in Tokkuzak Township that was visited by President Xi. After hearing a report on the situation in the school, President Xi joined the students to pose for a group photo. Yao Hongyu, secretary of the school's Party branch, described the changes that have occurred in the school over the past eight years—a more beautiful school campus, a new rubber running track, and there is also the robot "Xiao Ai" whom students adore. This previously backward school is now a fully modern facility. Those students who once posed for a photo with President Xi are now fully grown and are spread across the four corners of the country.