Fuping County: With Confidence, Even Barren Clay Can Be Turned into Gold

The meandering waters of the Yanzhi River have borne witness to the momentous changes that have swept Fuping County in Hebei Province.

Fuping lies deep in the Taihang Mountains. As a renowned revolutionary base area, it contributed greatly to victory in the Chinese revolution, serving as the seat of the Shanxi-Chahar-Hebei Resistance Base—the first resistance base area behind enemy lines in the War of Resistance Against Japanese Aggression. But constrained by its natural environment and poor resources, Fuping remained trapped in poverty for a long period.

In December 2012, President Xi Jinping trekked through the snow to visit the villages of Luotuowan and Gujiatai in Fuping County. He sat with residents on the traditional kang (heated bed, usually built with mud and bricks), lifted pot lids to check if people were eating well, and chatted with them about their difficulties and poverty alleviation policies. President Xi emphasized, "We cannot say we have realized a moderately prosperous society if the rural areas, especially the impoverished parts of the countryside, are left behind." Thus, the call for a decisive victory in the battle against poverty was sent out from Fuping to the rest of China. 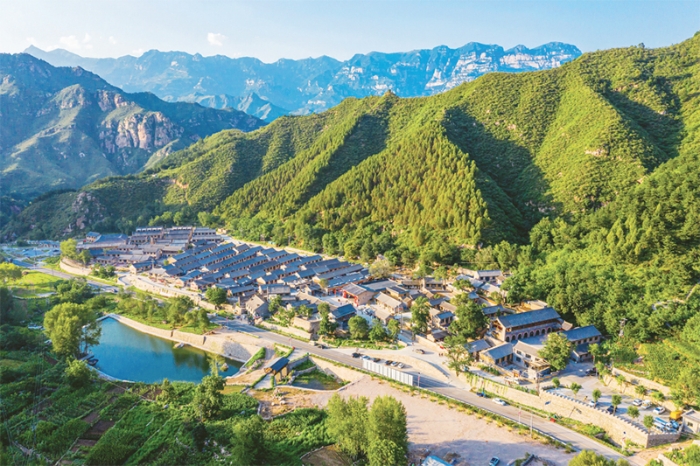 Pooling strength for the people's benefit

"As we often say, 'With confidence, even barren clay can be turned into gold.'" "I hope folks in rural areas who are in difficulty can stay confident, and with the help and support of the Party and government, use their own hands to climb from poverty to prosperity." During his visit, President Xi's words placed the keys for poverty alleviation in the hands of the people and provided powerful momentum for the fight that officials and residents were waging against poverty.

"We need to follow President Xi's instructions, generating overarching synergy with the Party branch at the core of our efforts. As long as we work as one, target the same goals, and pull in the same direction, all of our endeavors will continue to prosper." Gu Shujun, currently deputy Party branch secretary in Gujiatai Village, has always kept President Xi's instructions in mind.

The public are the main actors in poverty alleviation, but Party branches are the critical factor. Villagers in Gujiatai previously lamented that the many mountains, scarce water, and scant fertile land made it almost impossible to earn a living. But under the leadership of the Party branch, they have shifted away from traditional small-scale farming, which put them at the mercy of the elements, and engaged in tourism, local business, apple and mushroom cultivation, homestay business, and live-streaming. As early as 2017, the village had shaken off poverty and gained a completely new look.

Many villages in Fuping County have eliminated poverty in a similar way. Based on local conditions, the county has pushed hard to develop six industries that can enrich people: modern edible mushroom farming, high efficiency forest fruit cultivation, TCM herb production, animal farming, cottage industries, and eco-tourism. It has also moved quickly to develop several sectors—manufacturing of new-energy equipment, primarily for photovoltaics; production of green building materials, mostly for prefabrication; deep processing of green secondary agricultural products; and integrated tourism based on ecological conservation and revolutionary history. In 2021, the per capita disposable income of rural residents in the county reached 12,342 yuan, 3.7 times that of 2012. Thanks to their confidence and practical efforts, the people of Fuping have turned their once hostile natural environment into a positive one and have embarked on a new road of creating prosperity from barren clay.

During his visit to Luotuowan Village, President Xi visited the homes of Tang Rongbin and Tang Zongxiu, both of whom were living in difficult circumstances at the time. Seeing that some in the old revolutionary base area were still battling poverty, President Xi stressed that "Party committees and governments at all levels should make it a priority to help people in difficulty, especially those in the old revolutionary base areas and poverty-stricken areas, to break away from poverty and achieve prosperity.... Leading officials at all levels must keep people living in deprivation in mind, help them in good time and work for them diligently."

Today, photos of Tang Zongxiu talking with President Xi hang on the wall of her home. "When President Xi visited, we still lived in the old family home, built of mudbrick, with windows of handmade paper," recalls Tang. Previously, the village was classed as an extremely poor village. A total of 428 people out of a population of 608 still lived in poverty in 2012. Six years ago, 247 households, including Tang Zongxiu's, moved into new homes, either by relocating to newly built houses or having their existing homes rebuilt. Tang wears a wide smile as she surveys her new home, equipped with aluminum doors and windows and all modern home appliances including a color TV. "Thanks to the Party's good policies, we are lucky to live in the good times, and our lives continue to improve."

The changes have not been limited to housing. Road transportation has improved, too. Since 2013, the county has built or upgraded 50 highway routes, totaling 501 kilometers, and constructed 500 kilometers of village roads. It has become easier to attend school. Thirteen rural boarding schools have been built around the county, and 93 projects to upgrade conditions in rural schools have been carried out, while a new vocational school campus has also been constructed. Getting medical care has become more convenient. The county has upgraded 13 township health centers and 209 village clinics, and implemented poverty relief policies, including the "treat now, pay later" program for previously poor people. The environment is more beautiful, as the county has promoted environmental improvement projects, including the "toilet revolution" initiative. President Xi's call to "let villagers realize better lives as quickly as possible" has become a vivid reality today.

The old revolutionary spirit shines on.

"Your feeling for the Party runs deep," said President Xi, praising residents of the old revolutionary base area during his visit to Fuping. He pointed out, "You have a fearless spirit and a vigor reminiscent of the revolution.... You will undoubtedly complete the historical task of alleviating poverty and creating prosperity."

"The innumerable mountains and valleys are an impregnable fortress. The flames of resistance burn on Taihang Mountains." These lyrics are from the song On Taihang Mountains, written more than 80 years ago during the War of Resistance Against Japanese Aggression, to laud the heroic sentiments of the legions of soldiers and civilians who fearlessly fought their aggressors. On the revolutionary land of Fuping, the Party has led the people in struggles against both enemies and poverty. The fearless and tenacious spirit of the old revolutionary base area lives on today in every local resident.

Fuping has taken coordinated steps to promote the protection and use of revolutionary resources, which include the former headquarters of the Shanxi-Chahar-Hebei Area, the former residence of Mao Zedong in Huashan Village, and the former offices of the Shanxi-Chahar-Hebei Area daily newspaper in Malan Village. It has also hosted an exhibition under the theme "An Immortal Monument to the Resistance." It continues to keep alive and carry forward the revolutionary spirit and has stepped up educational initiatives on revolutionary history. Departing from a new starting point and having bid farewell to poverty, Fuping is now advancing toward the goals of rural revitalization and common prosperity.