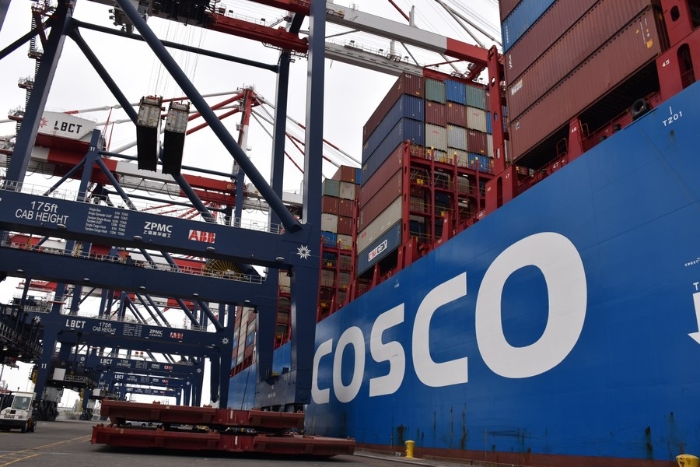 A container ship of China's COSCO Shipping docks at a new container terminal of the Port of Long Beach in California, the United States, Aug. 20, 2021.

"Different countries and civilizations may prosper together on the basis of respect for each other, and seek common ground and win-win outcomes by setting aside differences," he added.

Xi's remarks elaborated on "Xiconomics," or the economics philosophy of the Chinese president, demonstrating China's commitment to building a harmonious world, promoting common development and enhancing the common interests of mankind.

"We need to learn from comparing long history cycles, and see the change in things through the subtle and minute. We need to foster new opportunities amidst crises, open up new horizons on a shifting landscape, and pool great strength to go through difficulties and challenges," Xi said in his special address, giving insight into a world battered by both the COVID-19 pandemic and sluggish economic growth.

In the past two years, under the guidance of Xi's economic thought, China has struck a fine balance between pandemic control and economic development.

In 2020, China has emerged as the only major economy with positive growth. In 2021, its gross domestic product saw a year-on-year increase of 8.1 percent, contributing around a quarter to world economic growth and beating most market expectations. The country has also played a crucial and irreplaceable role in supporting the global supply chains.

Alexander Petrov, a professor at St. Petersburg State University, said China's success has proved that in a socialist market economy, it is possible to coordinate the efficiency of economic development and social governance, which is needed for global economic recovery in the post-pandemic era.

China has once again become one "driving force of the global economy," said Jochen Goller, president and CEO of BMW China, who spoke highly of China's concerted efforts and strong resilience in both successfully fighting against COVID-19 and boosting economic recovery.

China's steady growth has served as a stabilizer for the world economy amid the pandemic. It has been implementing a development philosophy featuring openness and cooperation, which helped strengthen global solidarity for economic recovery.

"Countries around the world should uphold true multilateralism. We should remove barriers, not erect walls. We should open up, not close off. We should seek integration, not decoupling. This is the way to build an open world economy," Xi said, urging countries worldwide to "make economic globalization more open, inclusive, balanced and beneficial for all, and to fully unleash the vitality of the world economy."

Humphrey Moshi, director of the Center for Chinese Studies at the University of Dar es Salaam of Tanzania, said that "China has been on the front line of encouraging multilateralism among global countries, and it has been doing that through cooperation on the principles of a win-win situation."

"As a staunch supporter of globalization, China has been actively participating in and promoting international cooperation against COVID-19, providing medical equipment and COVID-19 vaccines to many countries," Moshi said.

"China stands ready to work with all countries to build an open world economy so that the spring breeze of openness will bring warmth to all parts of the world," Xi said at the opening ceremony of the fourth China International Import Expo in November 2021, reiterating China's resolve to open wider and with a high standard.

From shortening the negative list for foreign investment and improving the business environment to expanding institutional opening-up, China has honored its commitments by offering more opportunities to other countries, which injected fresh momentum into global economic recovery.

Honson To, chairman of KPMG China and Asia Pacific, said China has kept opening wider to the world, upheld and acted on multilateralism, as well as actively pushed for a more inclusive global cooperation, sending a positive signal that China is willing to work together with other countries for a better future.

At a time when the international community is struggling to reduce the development gap and secure equal opportunities for all, China has offered its solution to the problem by underlining the people's desire for a happy life.

"No matter what difficulties may come our way, we must adhere to a people-centered philosophy of development, place development and livelihoods front and center in global macro-policies, realize the UN's 2030 Agenda for Sustainable Development, and build greater synergy among existing mechanisms of development cooperation to promote balanced development worldwide," Xi said at January's forum.

In the eyes of Raphael Tuju, secretary-general of Kenya's ruling Jubilee Party, this people-centered philosophy of development Xi emphasized is well manifested in the Chinese president's famous remarks that "for the good of my people, I will put aside my own well-being."

By the end of 2020, China had lifted out of poverty all rural residents living below the current poverty line and met the poverty eradication target set out in the 2030 Agenda for Sustainable Development 10 years ahead of schedule.

Its own people's well-being is not the only thing China cares about. As Xi noted, "on the road to the well-being of all mankind, no country or nation should be left behind."

From China's growth to inclusive and common development of countries worldwide, Xi's economic thought addresses the need of the development of mankind through a variety of cooperation frameworks, such as the Belt and Road Initiative (BRI).

The Mombasa-Nairobi Railway is a mega project under the BRI. It boosted Kenya's economy by significantly improving freight transportation, brought substantial benefits to local people, and at the same time protected the local ecological environment.

This is the beginning of the transformation, which will create jobs, hope, opportunities and prosperity for all Kenyans, Kenyan President Uhuru Kenyatta said during a test ride of the railway.

Another landmark project of Belt and Road cooperation is the 1,035-km China-Laos Railway, which has opened the landlocked country in Southeast Asia and connected it to markets as far away as in Europe since the railway's operation on Dec. 3, 2021.

Sommad Pholsena, vice president of the National Assembly of Laos, said while China was not the first country to express a willingness to build a railway in Laos, it was the only one to turn it into reality. 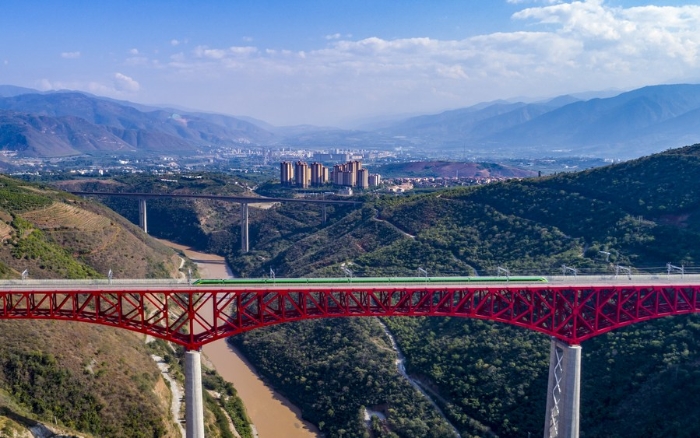 "The more we study the BRI and witness its continuous advancement, the more we can appreciate the vision and the wisdom of President Xi's economic thought on world development," said former Egyptian Prime Minister Essam Sharaf.

To tackle global challenges and seek sustainable development, the Chinese president has been promoting the building of a community with a shared future for mankind.

Mankind was presented with two choices -- one is vicious competition or even armed conflict for power and self-interest, which may well lead to a disastrous crisis, Xi said when addressing the CPC (the Communist Party of China) in Dialogue with the World Political Parties High-Level Meeting in 2017.

"The other is for us to go along with the tide of the times and rise to challenges through global collaboration," he said. "This, in turn, will create favorable conditions for building a community with a shared future for mankind."

For Khalid Taimur Akram, executive director of the Center for Global and Strategic Studies in Islamabad, the notion of building a community with a shared future for mankind bears significance for today's global development.

China has provided a platform for all to turn this vision into reality, as the international community is searching for ways to advance cooperation and resolve differences, Akram said.

In his speech in September 2021 at the general debate of the 76th session of the United Nations General Assembly via video, Xi said "we must revitalize the economy and pursue more robust, greener and more balanced global development. Development holds the key to people's well-being." 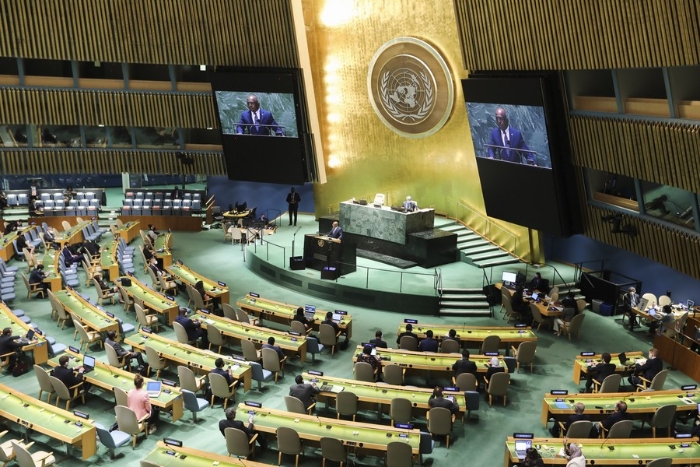 He then urged countries around the world to "work together to steer global development toward a new stage of balanced, coordinated and inclusive growth," and proposed the Global Development Initiative (GDI) to this end.

Speaking highly of the GDI, Tanzanian Minister of Foreign Affairs and East African Cooperation Liberata Mulamula said the pandemic serves as a reminder that the world is a community and no country should be left behind.

Since Xi brought up the concept of building a community with a shared future for mankind in 2013, China has been enriching it to reflect the hope of people from all countries for a better world.

"We should follow the trend of history, work for a stable international order, advocate common values of humanity, and build a community with a shared future for mankind. We should choose dialogue over confrontation, inclusiveness over exclusion, and stand against all forms of unilateralism, protectionism, hegemony or power politics," Xi said at the WEF meeting in January.

The notion of a community with a shared future is the right path for human development, which could help reduce global inequality, said Ronnie Lins, director of the China-Brazil Center for Research and Business.

The Chinese president's philosophy is of profound theoretical significance, said Maxim Rybachuk, leading researcher at the Central Economic Mathematical Institute of the Russian Academy of Sciences.

"We are talking about development concepts such as inclusive growth and dual circulation that have benefited both the Chinese people and people in other countries," Rybachuk said.